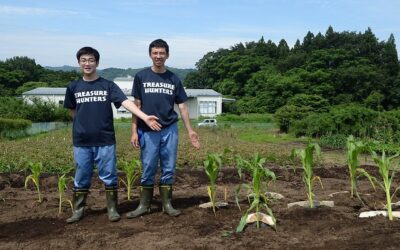 Stockholm Junior Water Prize is an international competition where students between 15 and 20 present solutions to major water challenges.

Hiroki Matsuhashi and Takuma Miyaki have developed a method to control soil runoff and increase food production, using the traditional Japanese soil solidification technology Tataki.
"This system is made of only inexpensive natural materials, so it is cheap and eco-friendly. We would like to spread this system to the world and solve water and food problems," the duo said in a filmed presentation of their project.
The Jury noted that: "This year’s winners have proven that simple local solutions can solve water problems in a global context. Through systematic studies the contestants have developed methods to make water conservation and soil management more achievable. The contestants effectively combined scientific knowledge and experimentation to revolutionize the way water is collected, used, and conserved for agriculture in arid regions."
The winners were announced by HRH Crown Princess Victoria of Sweden, the Prize’s Official Patron, who expressed great admiration for all the finalists. The announcement was made during an online award ceremony as part of World Water Week At Home on August 25.

A Diploma of Excellence was awarded to Zoe Gotthold, USA, for a creative approach to limiting the impact of oil pollution in marine ecosystems. By isolating the emulsion that forms between spilled oil and seawater she had found a promising solution and "demonstrated extraordinary knowledge and perseverance", according to the Jury.
This year, the public could also vote in the People’s Choice Award, which went to Adittya Kumar Chowdhury and Khaled Iftekhar from Bangladesh. They have developed a low-cost method to purify water with naturally derived poly glutamic acid and Moringa oleifera seeds.
Stockholm Junior Water Prize has been organized every year since 1997 by Stockholm International Water Institute, SIWI, with Xylem as Founding Partner. This year everything was however online, due to Covid-19. "I am humbled by the fact that many of these projects were developed under the most challenging of circumstances," said Ania Andersch, manager for Stockholm Junior Water Prize at SIWI.
Further information is available at www.siwi.org.