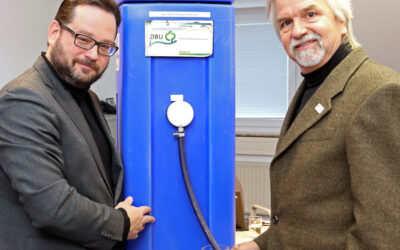 “Water is the source of life. And yet, in many countries around the world, people do not have access to clean drinking water. That is why we are pleased to help improve the lives of children and young people in southern Africa with eight water backpacks.” With this statement, Alexander Bonde, General Secretary of the German Environmental Foundation (DBU), presented the child relief agency terre des hommes with a donation of eight PAUL portable water filters in Osnabrück, Germany. The DBU is donating a total of 25 of these mobile water filters to various relief organizations, including transport to the areas where the organizations are active. A number of DBU employees proposed this donation in honor of the foundation’s 25th anniversary. The water backpack was developed at the University of Kassel with professional and financial support from the DBU.

“After we were able to successfully introduce PAUL in Haiti after the earthquake in 2010, and also in villages in India as part of an educational project, we are pleased to provide long-term help to people outside of crisis zones who do not have access to clean drinking water,” explained Albert Recknagel, Chairman of the Board of terre des hommes Germany. “Clean water saves lives. Around 1.5 million children die of diarrhea every year as a result of waterborne diseases.” The children’s relief organization will be responsible for getting the backpacks to Africa; local organizations will be responsible for all further steps.

PAULs to be brought to Mozambique, Zambia, and Zimbabwe

According to Recknagel, five PAULs will be donated to Wona Sanana, an NGO that focusses on early child development and education. The water backpacks will provide clean water in communes in Mozambique, primarily for kindergarten- and primary-school-aged children. With the help of the NGO Nhaka Foundation, kindergarten children in the village of Chitakatira in Zimbabwe will also soon have access to clean drinking water instead of untreated river water. “The other two PAULs will be donated to two educational centers – one in Kazungula, Zambia, and one in Lower Gweru, Zimbabwe. In these centers, the partner organizations there – Midlands Aids Service Organisation and Environment Africa, respectively – educate unemployed young people on the topics of water management, farming methods that are compatible with local conditions, and renewable energy,” says Recknagel.

Nearly 3,000 PAULs currently in operation around the world

A blue, portable lifesaver: PAUL (which stands for Portable Aqua Unit for Lifesaving) backpacks were developed around ten years ago as part of a project that was funded by the DBU. They are designed to help people in the aftermath of natural disasters. Bonde: “Survivors must be provided with clean drinking water as quickly as possible because drinking contaminated water can result in serious diseases and even epidemics.” Water filtration systems for mobile emergency supplies already existed when the PAUL was developed, but they tended to be extremely technically complex, and required a great deal of operating personnel and energy. Moreover, they often necessitated the use of chemicals as well, and the transport and commissioning of these systems was difficult logistically, and often took too long. PAUL, on the other hand, requires no electricity or chemicals. One single filtration system can filter bacteria and contamination out of up to 2,500 liters of water per day. “At the beginning, the water backpack was only intended as an emergency measure to provide clean drinking water in disaster areas, but since it was so effective, it was often used as a stationary water supply,” explains Bonde. Nearly 3,000 PAULs are currently in operation around the world.
A film on the use of PAUL backpacks in India: https://www.youtube.com/watch?v=ZxV3lRUXO20