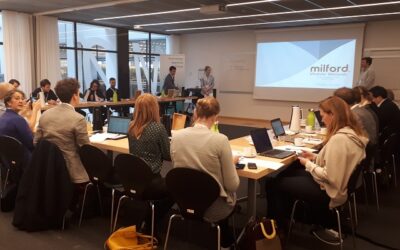 European cities need to transform their infrastructure if they are to meet the emerging challenges posed by the effects of anthropogenic climate change. From a water perspective, this means there is now a higher probability of flooding from heavier precipitation and storm surge, but also an increased risk of not having enough water available to keep taps flowing.
Other issues arising include flood damage to buildings and other street infrastructure; sewer overflows polluting watercourses and water bodies and the declining quality of lakes, rivers and reservoirs. Biodiversity is also at risk along with public health and the psychological wellbeing of those affected by extreme weather events.
UN-Habitat’s Urban Resilience Hub has defined urban resilience as "the measurable ability of any urban system, with its inhabitants, to maintain continuity through all shocks and stresses, while positively adapting and transforming toward sustainability" and a key part of that ability will be technological. It is against this background that Isle set up its Urban Resilience Technology Approval Group (UR TAG) in 2019.

The group has spent the last year actively identifying and piloting water technologies that help transform cities’ infrastructure as they adapt to climate change. Designing and structuring the urban environment to absorb and capture as much rainwater as possible can reduce and prevent floods. The harvested rainwater can also be repurposed for irrigation and greywater domestic use.
China is leading the way to sustainable drainage systems (SuDS) at city scale, with plans for ‘sponge cities’ where 80% of the country’s urban centres harvest and reuse 70% of rainwater. Building SuDS at scale and driving urban resilience requires significant investment, which is another reason UR TAG is so important.
Utilities and municipalities can pool project experiences, share best practice and collaborate on technology trials so that they can learn from each other, avoiding unnecessary repetition and costly mistakes.

The next platform meeting for UR TAG members takes place in Antwerp, Belgium on February 12 and 13, 2020 and will include an excursion to see the host city’s urban resilience infrastructure.
Attendees will hear presentations from five shortlisted technology companies as well as an interactive policy and strategy session with peers from across Europe.