Home » Young Champions of the Earth Prize: meet the winner for Latin America and the Caribbean

Young Champions of the Earth Prize: meet the winner for Latin America and the Caribbean 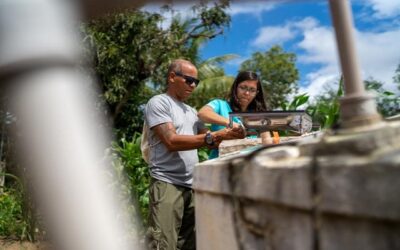 Beserra’s solution Aqualuz is an innovative filter which purifies rainwater collected in a cistern installed in rural areas where running water is not accessible, a situation which affects more than a million people in Brazil. The water in the cistern is purified using rays from the sun. An indicator changes color when the water is safe to drink.
"My purpose is to bring the basic right of clean water to disadvantaged communities in rural areas," said Beserra. "We want to help make people’s lives better and potentially save lives."

Her invention is low-cost and easy to maintain, and can last up to 20 years. While so far used only in Brazil, it has potential for application in other countries. Aqualuz has already delivered clean drinking water to 265 people and will reach another 700 this year.
Inger Andersen, Executive Director of the UN Environment Programme (UNEP), said: "Our water-stressed planet is bearing the brunt of relentless extraction, pollution and climate change. It’s vital that we find new ways to protect, recycle and reuse this precious resource. Making drinking water safe and accessible for all is vital for delivering on the Sustainable Development Goals."

The Young Champions of the Earth prize

A global jury, made up of Covestro Chief Executive Officer Markus Steilemann, UN Environment Programme’s Deputy Executive Director Joyce Msuya, VICE News Tonight’s science and climate change correspondent Arielle Duhaime-Ross, UN Secretary-General’s Envoy on Youth Jayathma Wickramanayake and Kathy Calvin, President and Chief Executive Officer of the United Nations Foundation, selected the winners among 35 regional finalists from over 1,000 applicants.
Over the next year, the creative, innovative and impactful initiatives of the winners will be documented on social media, through regular news updates and video blogs.
The prestigious Young Champions of the Earth prize, powered by Covestro, is awarded every year by the UN Environment Programme to young environmentalists between the ages of 18 and 30, for their outstanding ideas to protect the environment.
Anna-Luisa is one of seven winners from Africa, North America, Latin America and the Caribbean, Asia and the Pacific, Europe and West Asia. The winners received their award during the Champions of the Earth Ceremony in New York City on 26 September, coinciding with the annual United Nations General Assembly meeting and the Climate Action Summit.
Source: UN Environment