A superhighway for used water management 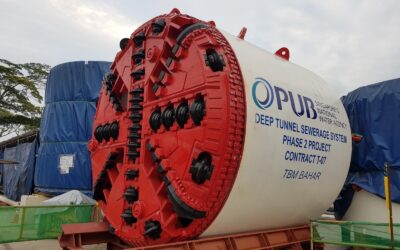 The city-state’s efforts to raise self-sufficiency in water include seawater desalination as well as wastewater recycling into ultraclean, high-grade reclaimed water called NEWater. The DTTS is being built as core water infrastructure to support Singapore’s continued growth and meet its long-term needs for used water collection, treatment, reclamation and disposal. The pipeline is 3- 6 meters in diameter and buried 35- 55 meters underground. It will collect wastewater from households and factories and transport it to treatment plants, which will be used mainly for industrial and air-con cooling purposes. The completed DTSS will streamline the used water network with three centralized collection and treatment points: Changi WRP in the east, Kranji WRP in the north and Tuas WRP in the west. Used water will be conveyed to the future Tuas Nexus for treatment and recycling.
"For us in Singapore, used water is a source of good water. We do not waste a drop of it," said Ng Joo Hee, chief executive of the Public Utilities Board.
The approximately 90km of deep tunnels and 120km of link sewers, which are scheduled for completion by 2025, are meant to increase the share of recycled wastewater to total water demand in Singapore from the current 40%. The government hopes to meet up to 85% of demand with wastewater recycling and seawater desalination by 2060.
Water-scarce Singapore is investing heavily to raise its water self-sufficiency rate because it has periodically faced pressure over the issue from neighboring Malaysia, which has traditionally supplied it with much of its water. The 1962 Water Agreement between the two countries gives Singapore the right to 250 million gallons of water a day from the Johor River at a price of 0.03 ringgit (0.7 cent) per 1,000 gallons.