Home » 4. WATREX EXPO in Egypt: megaprojects in the field of water infrastructure

4. WATREX EXPO in Egypt: megaprojects in the field of water infrastructure 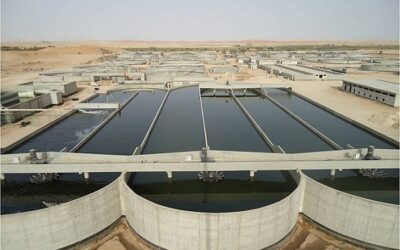 The Egyptian government will move to its new administrative capital as early as the second half of 2019. The new Cairo is built about 50 km southeast of the current Cairo, halfway to the Suez Canal. The government is investing between US$ 10 and US$ 20 billion in the construction of this new city, which is to become SMART. The plan envisages that 6.5 million inhabitants will live in 21 residential areas, for which 2,000 schools, 600 medical facilities and 1,250 mosques are to be built. The road network will cover 650 km and the tallest tower in Africa is to be built. A new international airport is under construction, which will also be connected to the current airport in old Cairo via a train connection. Numerous construction projects are already taking concrete shape.
The operating company Administrative Capital for Urban Development (ACUD) relies on several building blocks to create a smart and sustainable new administrative capital. It is to be supplied not only by the nearby gas-fired power plant, but also by solar farms. The consumption of electricity, gas and water is observed and reduced by technical solutions. Intelligent building technology should ensure saving of resources.
Water is a central concern of the government and various ministries (housing, industry, agriculture, investment) that deal with water infrastructure. The 6.5 million inhabitants of New Cairo must be connected to the water network. Work on the road and water infrastructure and the large power plant to be built by Siemens and Orascom Construction will create an infrastructure base. According to Mostafa Madbouly, Minister of Housing, Egypt will focus on desalination for drinking water production in the coastal governorates, while agriculture will be supplied with Nile water. For the new capital, a sea desalination plant for 650,000 m3 of drinking water per day is to be built in Ain Sokhna on the Gulf of Suez.

Water and sanitation sector in Egypt

The water and sanitation sector is a constant investment focus in Egypt. Due to the need for expansion and renewal, water scarcity and population growth, further increases are expected. The water sector is also the focus of particular attention of international donors, which makes the financial implementation of projects much easier – since 2007, the EU alone has launched 16 programmes for the Egyptian water sector. On the occasion of World Toilet Day in November 2017, the Ministry of Housing, Utilities and Urban Communities declared that it would connect 957 villages to the sewerage networks. The water supply in Egypt had a coverage of 96 % and was thus almost nationwide. By contrast, 83 % of urban areas, but only 15 % of rural regions, had connections to sewage networks. In 2015, the fresh water sector comprised 2,845 installations and 167,000 km of distribution networks. This was offset by 395 sewage treatment plants and 48,000 km of sewerage networks. According to a report in the Al Mal newspaper, the Ministry of Electricity is planning a tender for the construction of small hydropower plants on the banks of the Nile River in 2019. The plants are expected to have a total capacity of 150 to 200 megawatts. The ministry expects costs of around EUR 285 million.

Water events and trade fairs in Egypt: investments in the new Egyptian capital are increasing

The Egyptian market has also been noticed in Germany. GERMAN WATER PARTNERSHIP (GWP), Berlin, is organizing the Egyptian-German Water Partnership Day for the first time on February 5, 2019 in Cairo. This event is organized by GWP in cooperation with the local German-Arab Chamber of Commerce. In addition to best practice presentations and panel discussions, the participants will meet Egyptian decision-makers. The main topics are Municipal and Industrial Waste Water Management and Energy Efficiency in Water Supply and Waste Water Treatment. This GWP initiative underlines the interest of the export-oriented economy in Egypt’s water projects.
The 4th edition of the water trade fair WATREX EXPO, which occupies the leading position in Egypt, will take place in the new Egypt International Exhibition Center from March 20 to 22, 2019. EGY WASTE & RECYCLING will also take place at the same time. Traditionally, this exhibition network is under the patronage of President El-Sisi and several specialist ministries. With 18,000 trade visitors at the last event, WATREX EXPO is the largest trade fair for water management in Egypt. WATREX EXPO stands for the entire water cycle, from extraction, desalination, distribution, water and wastewater treatment. EGY WASTE & RECYCLING EXPO covers the entire process of waste management, collection, transport, separation, treatment, recycling. These two trade fairs are complemented by PIPE AFRICA, a trade fair for pipes and sewers. Exhibitors will come across trade visitors from the public sector, ministries, municipal administrations, utilities and waste disposal companies, water and environmental authorities, urban planners, architects and engineers, industry, trade and commerce, project planners and contractors.
Further information: http://www.watrexexpo.com