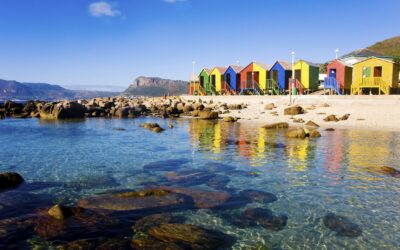 This despite predictions that South Africa’s tourism capital could have become the first major metropolis in the world to run completely dry. The city’s rally call now is that it’s still very much open for business and ready to welcome back visitors after what has predictably been a dry season for its attractions and accommodation venues.
The latest rainy period produced fairly good rainfall, bringing dam levels up to far more acceptable levels. While restrictions on daily water usage have been revised, some restrictions will remain in place as a safeguard. Cape Town businesses have been very successful in adapting how they use water and signage remains up in hotels and attractions about how to limit water usage. Visitors have been very accepting when it comes to playing a part in saving water, since it’s viewed as the responsible thing to do.
Based in Cape Town, Danny Bryer – a South African himself and Area Director of Sales, Marketing and Revenue Management at Protea Hotels by Marriott and African Pride, Autograph Collection Hotels – says this is a true reflection of the city’s ability to rise above adversity: "In fact, the potential long-term gains that the process has afforded us could also provide vital lessons for other cities, as the world moves increasingly towards the necessary sustainability of our natural resources. This is about more than water – we are a world-renowned travel destination, so sustainability is always going to be a focus in our unique attractions."

"Cape Town was a victim of its own success"

A leading international expert in environmental and natural resources law and policy, based at the Stanford University Woods Institute for the Environment in California in the USA, Professor Barton Thompson has spent time in Cape Town lecturing on water policy and is acquainted with both the city and its water crisis. In an article written for Stanford Law School earlier this year, he says Cape Town was a victim of its own success: "Cape Town is ironically at greater risk because it has been excellent at conservation."
He adds that Cape Town has been a model city in reducing its per capita water usage and has won awards for its green water policies. However, this has also enabled growth of around one million people moving to Cape Town over the past decade – without looking for new sources of water. He cites numerous cities in similar situations, in the USA , Australia, Brazil, Venezuela, India and China.

In 2017, and in preparation for the worst as Cape Town headed towards its hot summer season, and with the overall intention to drop demand, the City of Cape Town rolled out a disaster-management plan, the end goal of which was to still be able to provide its citizens with water even if its dams ran dry – the notorious "Day Zero" scenario and the name given to the City’s public awareness and phased-in activation campaign.
The three main touch points were: making it through to the Cape’s traditional winter rainfall season in mid-2018, managing the remaining water in the dams with dam levels communicated via the media daily, and devising systems and spending money towards infrastructure that would prioritise bringing on-stream water from other sources such as reusable and groundwater, and the installation of desalination plants.
As a result of the aggressive campaign, Capetonians restricted their personal usage to 50 litres per day, took 60-minute showers over buckets to catch and reuse water, recycled washing machine run off, flushed toilets once a day, drank bottled water and installed water tanks wherever space and funds were available.

The City’s Communication Director, Priya Reddy, has been quoted as saying: "It was the most talked-about thing in Cape Town for months when it needed to be. It was not a pretty solution, but it was not a pretty problem."
As a result, the city’s water usage dropped from 600 million litres per day in mid-2017 to 507 million litres per day by April 2018. "We really did need to make it alarming enough to ensure a water status turnaround."
Concludes Bryer: "The campaign also really made us as hoteliers think twice about water. As a nation and therefore as a city, we enjoy the challenge to be resilient. When South Africans experienced the electricity crisis a few years back, the lessons learnt became embedded in our collective national psyche and we’ve become accustomed to conserving energy. Likewise, for Capetonians, saving water has now moved to a challenge we embrace daily as we hopefully mitigate against ever finding ourselves in the same situation again."