Home » Lost glacier “Okjökull” to be honored with memorial monument

Lost glacier “Okjökull” to be honored with memorial monument 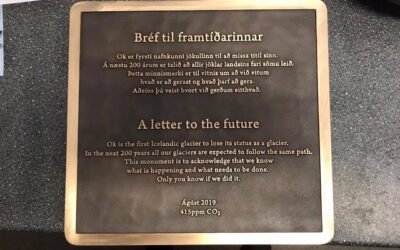 Researchers from Rice University in Houston, author Andri Snær Magnason and geologist Oddur Sigurðsson will join members of the Icelandic Hiking Society and the general public Aug. 18 to install a monument recognizing the site of the former Okjökull glacier in Borgarfjörður, Iceland.
The melted glacier was the subject of the 2018 documentary "Not Ok", produced by Rice anthropologists Cymene Howe and Dominic Boyer. The film, narrated by former Reykjavík Mayor Jón Gnarr, tells the story of "Ok", which in 2014 became the first glacier in Iceland to lose its title because of global warming. Boyer and Howe said scientists fear all of the island nation’s 400-plus glaciers will be gone by 2200.
"This will be the first monument to a glacier lost to climate change anywhere in the world," Howe said. "By marking Ok’s passing, we hope to draw attention to what is being lost as Earth’s glaciers expire. These bodies of ice are the largest freshwater reserves on the planet and frozen within them are histories of the atmosphere. They are also often important cultural forms that are full of significance."
"In the same spirit as the film, we wanted to create a lasting memorial to Ok, a small glacier that has a big story to tell," Boyer said. "Ok was the first named Icelandic glacier to melt because of how humans have transformed the planet’s atmosphere. Its fate will be shared by all of Iceland’s glaciers unless we act now to radically curtail greenhouse gas emissions."
The film celebrated its world premiere at Bíó Paradís Cinema in Reykjavík last August, and the film’s creators hosted an "Un-Glacier Tour" to view the remnants of Okjökull. A second "Un-Glacier Tour" will lead participants to the site where the monument will be installed. Those interested in joining the tour may RSVP online at https://www.notokmovie.com. Howe and Boyer hope the monument will raise awareness about the decline of Iceland’s glaciers and the impact of climate change.
"One of our Icelandic colleagues put it very wisely when he said, ‘Memorials are not for the dead; they are for the living’", Howe said. "With this memorial, we want to underscore that it is up to us, the living, to collectively respond to the rapid loss of glaciers and the ongoing impacts of climate change. For Ok glacier it is already too late; it is now what scientists call ‘dead ice.’"
Source: Rice University