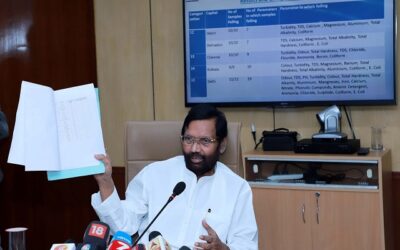 In the first phase, the samples of drinking water were drawn from various locations across Delhi and in the second phase samples were drawn from 20 State capitals and sent for testing as per Indian Standard 10500:2012 (Specification for Drinking Water) as set by the BIS. Tests were conducted on various parameters such as Organoleptic and Physical Tests, Chemical test, Toxic substances and Bacteriological tests in the first stage. A vast majority of the samples have failed to comply with the requirements of IS 10500:2012 in one or more parameters.
In Delhi, all the eleven samples drawn from various places did not comply with the requirements of the Indian Standard and failed on several parameters. All the ten samples drawn from Mumbai were found to comply with the requirements. In the cities of Hyderabad, Bhubaneshwar, Ranchi, Raipur, Amravati and Shimla, one or more samples did not comply with the requirements of the Standard and none of the samples drawn from 13 of the State Capitals i.e. Chandigarh, Thiruvananthapuram, Patna, Bhopal, Guwahati, Bengaluru, Gandhinagar, Lucknow, Jammu, Jaipur, Dehradun, Chennai, Kolkata complied with the requirements of the Indian Standard.
Addressing media after releasing the report, Shri Paswan, Union Minister of Consumer Affairs, Food and Public Distribution, said that the objective is not to demotivate anyone, but rather to encourage State Governments to ensure quality potable tap water to all citizens. Paswan further added that in the third phase, samples from Capital cities of North Eastern States and Smart Cities identified by Ministry of Housing and Urban Affairs have been drawn and are being tested. The results are expected by January 15, 2020.
There is a proposal for a fourth phase, where testing is planned to be completed by August 15, 2020. Shri Paswan said that the Union Government wants to make BIS Standards mandatory for tap water so as to ensure quality drinking water for all households.
Source: Bureau Government of India – Ministry of Consumer Affairs, Food & Public Distribution