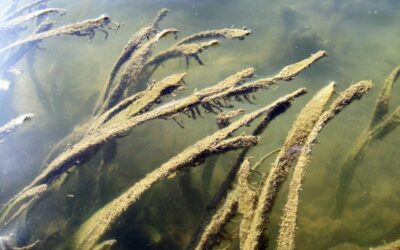 Seagrass meadows grow in the shallow coastal seas and cover an area of almost 18 million hectares worldwide. Some years ago, scientists estimated the economic value of this habitat at 19,000 US dollars per year and hectare – more than twice as much as was attributed to mangroves, coral reefs or the tropical rainforest. Seagrass is well known for its potential to store carbon dioxide from the atmosphere and simultaneously supply oxygen to their environment. Seagrass meadows serve as nursery for a large variety of edible fish and larger sea animals like purples and sea cows.

The ecosystem of seagrass meadows is threatened by eutrophication of coastal waters due to the increasing usage of coastal zones by aquaculture plants. Tim Jennerjahn, biogeochemist at the ZMT, and his team have monitored the state of seagrass meadows off Hainan island in the South China Sea in the years 2008/2009 and repeated their measurements. This area has been affected by growing aquaculture since the eighties of the last century. The researchers collected a set of over 1,000 measuring values from several, differently loaded points along the coast. They collected data about biomass content, biodiversity of seaweeds, the amounts of algae growth and the nutrient concentration of the water.
As nitrogen may also be transported from agricultural areas and through other wastewater discharges from the backcountry, an isotope analysis was carried out, through which aquacultures were identified as main originators of nitrogen emission. A high nitrogen concentration enhances the growth of phytoplankton and small algae that grow on the seagrass. "We found that, under this chronic load, 87% of the biomass has disappeared in a period of only ten years and its biodiversity has significantly decreased", said Esther Thomsen, biologist at ZMT and lead author of the study.
"With our project we would like to contribute to the preservation of this valuable ecosystem and are in close partnership with decision-makers and the general public on site. Among other things we organize Citizen Science projects and trainings for aquaculture farmers to sensitize them to the issue," reports Tim Jennerjahn. "With concrete values for nitrogen pollution as obtained here, we can now also to help them make the right decision."
The study was published in Marine Environmental Research 160, 104986. https://doi.org/10.1016/j.marenvres.2020.104986