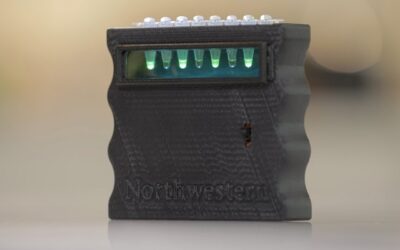 Led by researchers at Northwestern University, the tests can sense 17 different contaminants, including toxic metals such as lead and copper, pharmaceuticals, cosmetics and cleaning products. The platform — which is powered by cell-free synthetic biology — is so flexible that researchers can continually update it to sense more pollutants.
"Current water tests rely on a centralized laboratory that contains really expensive equipment and requires expertise to operate," said Northwestern’s Julius Lucks, who led the study. "Sending in a sample can cost up to $150 and take several weeks to get results. We’re offering a technology that enables anyone to directly test their own water and know if they have contamination within minutes. It’s so simple to use that we can put it into the hands of the people who need it most."
The research was published on July 6, 2020 in the journal Nature Biotechnology. Lucks is a professor of chemical and biological engineering in Northwestern’s McCormick School of Engineering and a member of the Center for Synthetic Biology. Jaeyoung Jung and Khalid Alam, members of Lucks’ laboratory, are co-first authors of the paper.

A major challenge of ensuring water quality is that people typically can’t see or taste contaminants. Northwestern’s platform uses synthetic biology to sense this unnoticeable contamination, filling in the gaps where human senses fall short.
In cell-free synthetic biology, researchers take the molecular machinery — including DNA, RNA and proteins — out of cells, and then reprogram that machinery to perform new tasks. The idea is akin to opening the hood of the car and removing the engine, which allows researchers to use the engine for different purposes, free from the constraints of the car. In this case, Lucks’ team used molecular machinery from bacterial cells.
"We found out how bacteria naturally taste things in their water," Lucks added. "They do so with little molecular-level ‘taste buds’. Cell-free synthetic biology allows us to take those little molecular taste buds out and put them into a test tube. We can then ‘re-wire’ them up to produce a visual signal. It glows to let the user quickly and easily see if there’s a contaminant in their water."
These reprogramed "taste buds" are freeze-dried to become shelf-stable and put into test tubes. Adding a drop of water to the tube — and then flicking it — sets off a chemical reaction that causes the freeze-dried pellet to glow in the presence of a contaminant.

Lucks and his team call this testing platform "RNA output sensors activated by ligand induction." But his team has nicknamed it ROSALIND for short, in honor of famed chemist Rosalind Franklin, who discovered the DNA double helix alongside James Watson and Francis Crick. Franklin’s 100th birthday would have been later this month (July 25).