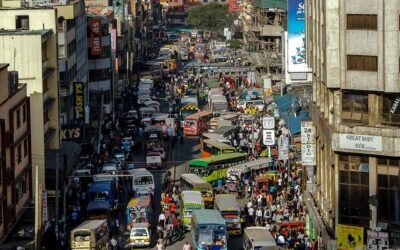 Nairobi, Kenya is suffering from a water shortage, threatening the livelihoods of nearly 3.5 million inhabitants. The Government of Nairobi stated that in January 2018, nearly half a million households had no access to water. Last year’s low levels have left the city in a strenuous situation. The capital is on the verge of experiencing a scenario similar to Cape Town, South Africa, if April’s rains fail to fill dwindling reserves.

Reservoir down to less than 40 % capacity

Nairobi’s main water reservoir, the Ndakaini Dam, was already more than half-empty last year, down to less than 40 % capacity by February 2017. The situation has required drastic measures like domestic rationing since January of this year in order to avoid a severe water crisis. Nairobi’s most impoverished neighbourhoods are particularly at risk, as water shortages exacerbate the spread of diseases like typhoid, dysentery and cholera, connected to poor sanitation. In Africa, more than 60 % of the population live in slum conditions without access to clean water and sanitation.

Sanitation was one of the worst performing sectors monitored by the Millennium Development Goals. Governments must think differently, society must innovate and people must act. In order for Sustainable Development Goal 6 to be met, ensuring the availability and sustainable management of water and sanitation for all, everyone involved in sanitation has a role to play. The World Water Council calls on the bravery of ministers and authorities to adopt radical new policy recommendations. Marginal gains will not be enough to provide sanitation services for the extra three billion people that cities are forecast to host by 2030. Incremental progress will not cope with continued rapid urbanization. For this reason, a focus on urban sanitation services is logical and necessary, for the much higher social and economic returns they promise.
"We need to look for forms of cooperation to rise to the sanitation challenge, finding win-win financial and technical solutions and increasing political will for prioritizing sanitation services. This is particularly important in Africa, where there is much work to be done in terms of sanitation infrastructure. We must persevere in this attempt to encourage cooperation and development, so the entire region can benefit and continue down the path of sustainable development", explains World Water Council President, Benedito Braga.

In the run up to the World Water Forum, the World Water Council has prepared a full report on “Increasing Financial Flows for Urban Sanitation”, highlighting solutions and policy recommendations to encourage improved sanitation and adequate funding. The report is based on a series of case studies on cities impacted by urban sanitation problems, informed by examples such as Nairobi in Kenya, Dakar City in Senegal, Durban in South Africa and Bogotá in Colombia. The report highlights the plight of eight different cities’ lack of funding to ensure adequate sanitation. Produced in four different languages (English, Spanish, Portuguese and French) the study, its policy recommendations and the case studies will be made available online here.
Source:World Water Council