Taking classes on a rainwater basin 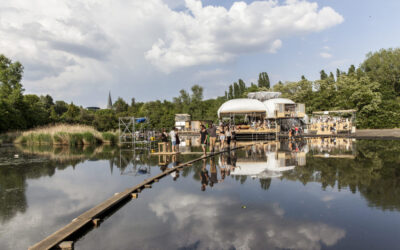 The project, which aimed to question urban routines and the future of the city, was idealized by a collective of architects called "Raumlabor". It started in May and is now coming to an end.
The university is an international project where not only students from all over the world, but also artists, local experts, architects and musicians came together to work out concepts for an improved urban life. For that, participants engaged on research projects, discussions and "questioning sessions" about the routines and habits of our society. To take the discussion even further, proposals on the reorganization of urban cities were made.

The setting of the university is also remarkable: it is located next to Berlins’ beloved former airport Tempelhof, in a nearly forgotten rainwater-basin, which is still used to hold back rainwater in times of great precipitation. The campus includes study halls, workshops, an auditorium, a tower with a laboratory and a water filtration system and, of course, a kitchen and a bar – all built by the students themselves at the beginning of the semester.
A final ceremonial diploma handover for all students and teachers – the Closing Ceremony – will take place on September 15.
More information on the Floating University Berlin can be found here.