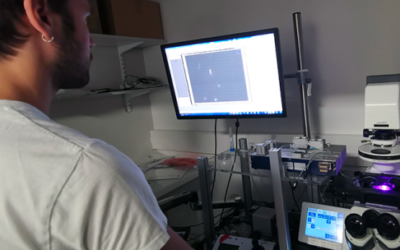 The research team was able to answer this important question with the help of experiments and mathematical calculations. The results describing all essential aspects of this amazing bacterial motion behavior have now been published in the journal "Nature Communications". Their insights could in the future help design medical devices that hinder the upstream progress of bacteria.

Between Physics and Biology

Many types of bacteria, such as E. coli, often representing a serious health hazard, move around with the help of small helicoidal flagella tails, in a way quite different from the motion of a fish. Fish feel the direction of the current and can decide to swim in a specific direction, whereas bacteria are much simpler, and their behavior can be explained by very basic physical laws.
Bacteria often accumulate on surfaces overflown by liquids – this can be the poorly cleaned shower cubicle, a sewage pipe or even a catheter. It turns out that bacteria migrate against the current on precisely such surfaces. They are therefore not washed away with the waste water, but they move upstream. Together with colleagues from Stanford University, Oxford University and TU Wien, Anke Lindner and Eric Clement’s group from PMMH lab from ESPCI Paris (PSL University) set out to find a physical explanation for this effect.

To track bacterial responses to flowing current, the PMMH group has monitored E. coli in microfluidic channels a few hundred microns width – about the width of a strand of hair. They then steadily ramped up the rate at which media flowed through the channels to observe the resulting bacteria dynamics.
The same group has recently developed very powerful observation tools and using an automatic 3D tracking device they were able to follow bacteria, along their upstream swimming trajectories. Fluorescently stained bacteria allowing to visualize not only the bacteria body but also their flagella (in total of a length of ten microns) revealed in addition an oscillatory motion of the bacteria. "It is fascinating how by looking through a microscope the dynamics of bacteria, not much more than ten micrometer long, can be revealed with such precision", reports Anke Lindner.
These experimental observations revealed very rich behavior as a function of the applied flow rate. In slow currents, the bacteria simply rotate in a circle, at a certain point they begin to move against the direction of flow. Even in stronger currents, they oscillate back and forth on the surface, or they separate into two different groups that move in different directions.
The teams from TU Wien and Stanford used mathematical methods to calculate how a bacterium can be aligned and rotated in a flowing liquid. They analyzed how the flow interacts with the movement of the flagella and which bacteria movement possibilities result from this. With a single mathematical formula, the whole range of bacterial movement patterns could be explained. "The agreement between experiments and simulations is found to be extremely good" points out Anke Lindner, "confirming the power of the developed mathematical formula." In addition, the results are very robust and do not depend on specific details, they can be therefore applied to different types of bacteria.
The team hopes that the newly gained understanding of bacterial motion will enable them to find methods that prevent bacteria from moving upstream. "In future, it might be possible to equip catheters with a specific geometric surface structure that prevents bacteria from migrating against the current and thus preventing serious infections to occur," hopes Anke Lindner.