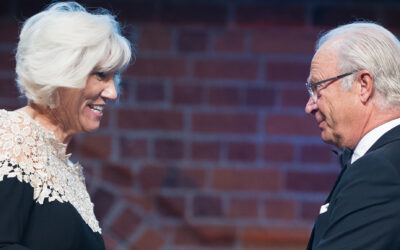 Professor Rose received the prize for assessing risks to human health in water and creating guidelines and tools for decision-makers and communities to improve global wellbeing. It was presented to her by H.M. Carl XVI Gustaf, King of Sweden, during a ceremony in Stockholm City Hall. In its citation, The Stockholm Water Prize Nominating Committee said that “The nexus of water-related microbiology, water quality and public health is rife with uncertainty – in both theory and practice. The world is blessed with few individuals who can tackle the increasing and changing challenges to clean water and health, starting from state-of-the-art science through dedicated and original research, then moving to professional dissemination, effective lobbying of the legislative arena, influencing practitioners, and raising the general awareness. Joan Rose is the leading example of this extremely rare blend of talents.”

"It is a prize that honours water"

After she received the Prize, Professor Rose said: “As an individual it is an honour and I am overflowing with gratitude. But it means even more, because it is a prize that honours water, it honours the blue planet and it honours the human condition. Therefore, I am very proud.” Joan Rose is widely regarded as the world’s foremost authority on the microorganism Cryptosporidium. In 1993, the largest outbreak to date of the intestinal parasite Cryptosporidium affected more than 400 000 people in Milwaukee, US, who got sick from contaminated drinking water. 69 people died in the outbreak. Cryptosporidium, which exists in both humans and animals, cannot be killed by chlorine, and lives for several months. Professor Rose and her team, whom she calls “water detectives” investigate waterborne disease outbreaks globally, to determine how they can be stopped, and prevented. She was the first person to present the widespread occurrence of Cryptosporidium in water supplies in 1988.

“More than two billion people still lack adequate sanitation, and over one billion lack access to safe drinking water. Hundreds of thousands of deaths from diarrhoeal diseases each year could be prevented by improved water, sanitation and hygiene. Joan Rose, our water hero, is a beacon of light in the quest for securing a better, healthier life for this and future generations,” said SIWI’s Executive Director Torgny Holmgren. Speaking of what she believes is the world’s greatest water challenge, Professor Rose said: “I think it is going to be the reversal of water quality problems around the world; the algal blooms in fresh water and coastal waters, and the pollution, not just associated with humans, but also with disease outbreaks among our wildlife, like amphibians and fish. I also think reconnecting water and food security will be a major challenge. We are starting to do it but it will definitely continue to be a challenge.”