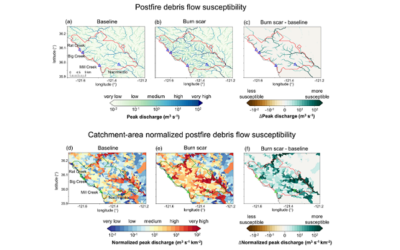 August 1, 2022 | A wildfire followed by an intense rainstorm is often a recipe for disaster. Without vegetation to cushion rainfall, water runoff can turn into a fast-moving, highly destructive landslide, called a “debris flow”, which often has the power to wipe out cars, homes and highways. Researchers from Northwestern University (USA) have now expanded a physics-based numerical model to investigate and predict areas susceptible to debris flows. This model could eventually be used in an early warning system for people living in high-risk areas, enabling them to evacuate before it’s too late.

Information from model simulations also could be used to design new infrastructure − such as diversion bars that deflect fast-moving water away from homes and roads − for high hazard zones.

“People want to know about their immediate and future risk,” said Northwestern’s Daniel Horton, the study’s senior author. “Although it’s not yet to operational standards, this modelling framework could one day be instrumental in forecasting where debris flows are likely to occur and deciding who needs to be evacuated.” Horton is an assistant professor of Earth and planetary sciences in Northwestern’s Weinberg College of Arts and Sciences, where he also leads the Climate Change Research Group. Chuxuan Li, a PhD candidate in Horton’s laboratory, is the paper’s first author.

As climate change increases the likelihood of wildfires and heavy rains, debris flows also might become more common. Just last year, a debris flow tore out a 150-foot section of roadway along Highway 1 near Big Sur, California. The picturesque two-lane highway was closed for three months, cutting off tourism to the region.

The disaster resulted from a one-two punch: A wildfire that burned from August through December 2020, followed by an atmospheric river − a long, thin string of concentrated moisture in the sky − that dumped nearly a foot of rain the following January.

Following intense rainfall, areas with wildfire burn scars are more susceptible to flash flooding. In a typical situation, vegetation interacts with rain, which then soaks into the ground. But if an area is burned, vegetation is gone, so it can no longer intercept the sudden influx of moisture. Even worse: In some regions, waxes from burned vegetation melts, enters the soil, and then solidifies. These waxes create a barrier for rain, blocking it from penetrating the soil. Instead, rain runs over the top of the soil, picking up rocks, mud, trees and even cars to become a debris flow.

“Because of human-caused climate change, the ingredients that lead to debris flows are certainly becoming more common,” Horton said.

To develop the new model, Horton’s team adapted the National Oceanic Atmospheric Administration’s National Water Model, which is used to simulate streamflow and water resources across the continental United States.

“The National Water Model is a community, open-source model, so researchers use it to probe all sorts of pertinent water resource and hazard questions,” Horton said. “But one thing the model didn’t explicitly output was overland flow − water that runs across the land after rainfall. We modified the model to look at how extreme precipitation moves over land surfaces, which allows us to investigate how susceptible certain land surfaces, and in particular burn scars, are to debris flow.”

By adjusting vegetation type (dense vs. barren, for example) and soil properties, the researchers were able to replicate how water moves over wildfire burn scars. The team then validated the model-simulated hydrological conditions using soil moisture and streamflow observations.

The resulting simulation found that burned areas cause water to flow much faster and in greater volumes compared to unburned land. When simulating the debris flow that took a bite out of Highway 1, for example, the researchers found overland flow volume increased eight-fold and peak flow tripled compared to land without burn scar characteristics.

“An advantage of our model is that it uses precipitation as it would fall in the real world,” Horton said. “We’re simulating spatially complex and time-evolving precipitation and how that precipitation interacts with the land surface.”

“Our physics-based hydrological model opens up new possibilities for better understanding of burn scar hydrology and debris flow susceptibility,” Li said. “Given the increasing likelihood of debris flow conditions due to climate change, developing models to better understand past events and predict future events is essential.”

The study, “Augmentation of WRF-Hydro to simulate overland flow- and streamflow-generated debris flow susceptibility in burn scars,” was supported by the National Science Foundation (award number 1848683). The  research was published on July 27 in the European Geosciences Union journal Natural Hazards and Earth System Sciences. 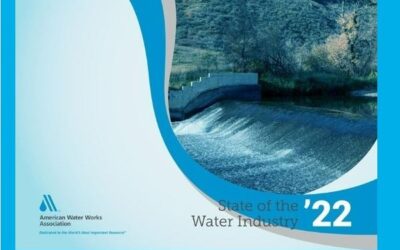 Continued impacts from the ongoing global pandemic, concerns about drought and water contaminants, and workforce shortages were the key issues identified in the American Water Works Association’s (AWWA) annual State ... 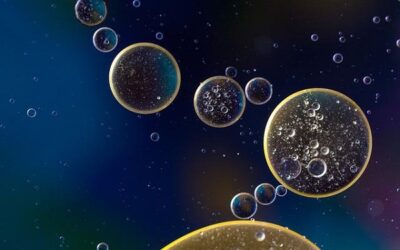 Scientists from Nanyang Technological University (NTU, Singapore), in collaboration with ETH Zurich (ETHZ, Switzerland), have created a membrane made from a waste by-product of vegetable oil manufacturing, which can ... 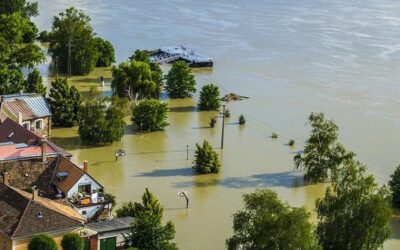 Ecological flood control, i.e. measures that restore floodplains, is effective, technically possible and economically efficient. Yet, this approach is not consistently implemented worldwide because of the high ...