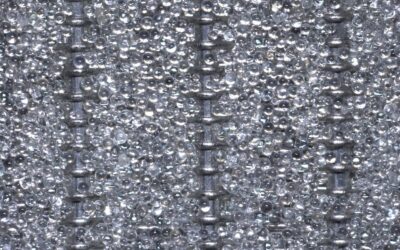 The American Filtration & Separation Society (AFS), the leading association in the field, presents this award each year for the world’s most significant new product. The Porometric mesh from GKD was chosen as the best product of 2016. Development engineer Dominik Herper was delighted to accept the award from Klaas De Waal, chairman of the AFS jury, during the AFS Spring Conference in Louisville, Kentucky. In presenting the award, the jury at AFS was keen to praise the significant efficiency and price benefits offered by the mesh for water filtration applications and the exploration of oil and gas thanks to its special binding capacity. The binding capacity offered by Porometric is characterised by a three-dimensional slotted structure with rectangular pores. With constant volumetric flow, it reduces local pore velocity by up to 40 percent, while at the same time increasing the flow rate several times over in comparison with conventional filter media.

GKD has therefore developed a solution to a problem identified within the scope of a comprehensive experimental study on the erosion behaviour of filter media in pipelines for gas and oil exploration. The study demonstrated that the filter materials currently used in pipelines are simply not capable of handling the local pore velocities encountered in boreholes. This is due to the extremely high delivery pressure chosen by the operators as a way of achieving effective production rates. However, the increased pore velocity associated with such high delivery pressure also increases abrasion due to the sand particles in the fluid, which then leads to rapid erosion of the filter media used. High flow rate, half the pore velocity GKD developed its Porometric material as an alternative to the unavoidable throttling of delivery rates in order to prevent extended downtimes.

Porosity of more than 70 percent

Thanks to its porosity of more than 70 percent, the material’s extremely open structure virtually halves the local pore velocity, while still guaranteeing a high flow rate. As a result of the greater porosity, the permeability is almost doubled over comparable plain dutch weave while maintaining the same separation rate and is actually more than three times greater than with comparable twilled dutch weave. With separation efficiency of 150 μm, the air permeability of Porometric meshes is 4,800 l/m²/s at 200 Pa. Particles falling within the required separating limits are separated quickly and reliably. Despite its open structure, the material is extremely stable. At the same time, this openness means reduced material usage, which in turn offers both weightsaving and price benefits. The combination of all these benefits enabled Porometric from GKD to fend off a record number of product innovations submitted by leading providers and take home the much coveted AFS New Product of the Year Award 2016.
Click here for further information