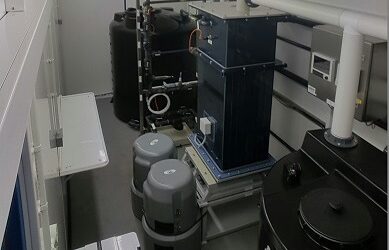 A laboratory-scale version of Arvia Technology’s Nyex treatment system was initially tested in partnership with Anglian Water at Arvia’s in-house facility. The capabilities proven by Arvia’s Nyex 1-20a resulted in the project being scaled-up, with the construction of a Nyex 7-50a pilot system on the site of 16,000 population equivalent wastewater treatment plant owned and operated by Anglian Water.
The onsite trial aimed to assess the system’s performance in treating a sidestream of real effluent containing a range of 60 selected trace substances over a 12-month period in 2016-17. Anglian Water carried out analysis on water samples pre- and post-treatment throughout the demonstration period.
As part of the UK water industry’s undertaking to achieve tighter water quality targets, a UK Water Industry Research (UKWIR) collaborative programme of work is underway. The Chemicals Investigation Programme 2 is being led by the water utilities and environmental regulators and seeks to investigate the sources of trace substances, where they occur and their removal from final wastewater effluents.
One part of the investigation was to assess – at pilot and full scale – technologies capable of removing trace substances such as pharmaceuticals and natural hormones. Anglian Water took the opportunity to trial Arvia’s Nyex process alongside water companies trialing a variety of other technologies.

Arvia chief executive Mike Lodge said: “Nyex treatment offers a targeted and cost-effective solution against persistent micropollutants in wastewater – which is an increasingly important issue for utilities.”
Arvia’s Nyex treatment systems combine adsorption with advanced oxidation in a single, scalable unit. Trace organics are concentrated on the surface of Arvia’s proprietary media, which is non-porous with high electrical conductivity. This patented adsorbent media allows for targeted and continuous oxidation.
Unlike granular activated carbon, Nyex media is effectively regenerated in situ and the process can continue without interruption or replacement. Results are achieved without chemical dosing or the generation of sludge, reducing costs in terms of transport of chemicals and specialist waste disposal.
Mike Lodge says, “Nyex has fully demonstrated its usefulness for the removal of micropollutants in tertiary treatment.“
Results from the technology trials have already been used to cost a range of full-size systems from 2,000 to 500,000 PE as part of the utility’s preparations for PR19 – the regulatory price controls for water companies in England and Wales which come into play in 2020.”

Arvia co-founder Nigel Brown said: “Arvia is continuing to build partnerships with utilities and industrial companies and we are delighted with the success of this project. Our technology is practical, cost-efficient and scientifically sound. There are no internal moving parts and although electricity is part of the process, it uses comparatively little energy.”
For further information please visit www.arviatechnology.com.