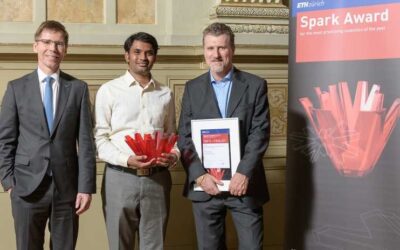 Their idea paid off: Raffaele Mezzenga, Sreenath Bolisetty and Qingrui Zhang, a visiting scholar at ETH from July 2017 to June 2018, received the Spark Award 2019 last March. Four years ago, Mezzenga, professor at the Institute for Food Science, and Bolisetty were among the finalists for the innovation prize awarded by ETH Zurich. This year, they finally succeeded: the jury chose their filter, which removes harmful fluoride from drinking water, as the winner. “Their invention is both highly beneficial to society and economically viable,” ETH President Joël Mesot praised the invention during the award ceremony, which was attended by about 200 guests.

How the idea was born

Drinking water with a high fluoride content is found in many regions all over the world. In some cases, fluoride contamination is man-made, but the substance also occurs naturally, which is the case for areas with volcanic soil. While a small amount of fluoride can prevent tooth decay, higher concentrations can cause fluorosis, which leads to hardening of the teeth and bones, or in the worst case to fluoride poisoning. The charcoal filter developed by the group of researchers is an affordable solution that can give people all over the world access to safe water. It is made from whey protein and atoxic zirconium oxide nanoparticles that removes fluoride from drinking water efficiently and economically. Mezzenga explained: “The filter is the result of a project during which we developed a technology to remove heavy metals from drinking water. A year and a half ago, the city of Rome became aware of our project and asked us if our technology could remove fluoride, too.” The idea of a fluoride filter was born. Bolisetty, who leads the ETH spin-off BluAct Technologies in addition to his academic work, is currently preparing the market launch of the product.

The number of innovative inventions coming from ETH Zurich has been at a consistently high level for many years. Last year yielded 224 inventions and 109 patent applications. It was also a record year for start-ups at ETH, Joël Mesot reported, with 27 launched. The Spark Award has often provided an initial impetus to researchers to start their own company.
Source/Further information: ETH Zurich